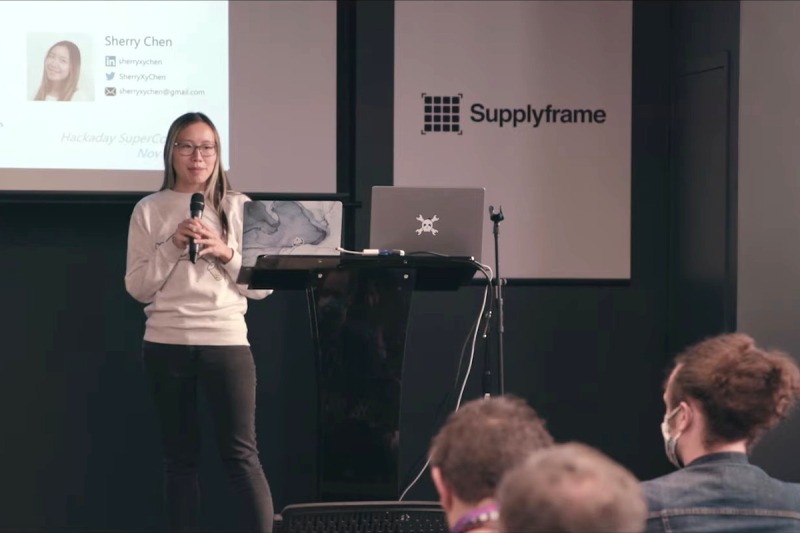 Supercon 2022: All Aboard the SS MAPR with Sherry Chen

Home
Articles
HackADay
Supercon 2022: All Aboard the SS MAPR with Sherry Chen

How do you figure out what is in a moving body of water over a mile wide? For those in charge of assessing the water quality of the Delaware river, this is a real problem. Collecting the data required to evaluate the water quality was expensive and time-consuming, taking over six years. Even then, the data was relatively sparse, with just a few water quality stations and only one surface sample for every six miles of river.

Sherry Chen, Quinn Wu, Vanessa Howell, Eunice Lee, Mia Mansour, and Frank Fan teamed up to create a solution, and the SS MAPR was the result. At Hackaday Supercon 2022, Sherry outlined the mission, why it was necessary, and their journey toward an autonomous robot boat. What follows is a fantastic guide and story of a massive project coming together. There are plans, evaluations, and tests for each component.

Sherry and the team first started by defining what was needed. It needed to be cheap, easy to use, and able to sample from various depths in a well-confined bounding box. It needed to run for four hours, be operated by a single person, and take ten samples across a 1-mile (2 km) section of the river. Some of the commercial solutions were evaluated, but they found none of them met the requirements, even ignoring their high costs. They selected a multi-hull style boat with off-the-shelf pontoons for stability and cost reasons. 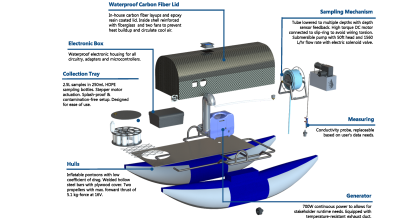 From a tech standpoint, they settled on a Raspberry Pi to provide the navigation and UI, an XBee module for wireless communication, and a mbed LPC1768 for low-level control. The Pi and the mbed talk to each other over a serial connection, and the XBee module allows an onshore operator to control the boat. The SS MAPR has a submersible pump that can be lowered and dispensed into a rotating collection tray for sample collection. The team validated that the selected motor could pump water up 45 feet into the correct collection tray using some math and experimentation.

One problem that arose was handling the probe being pushed at an angle by the current to the point where it leaves the one cubic meter sampling volume. After testing in a pool to check the math, sounding weights were the answer. Additionally, the team added a boosting and filtering circuit on both ends to account for signal integrity issues that may arise when sending probe data over 50+ feet.

To verify that the boat could maintain its position within two meters over 20 minutes, the team put it in the nearby Schuylkill river. They then shot footage from a drone, referencing landmarks to ensure it didn’t deviate outside the required radius. Once PID navigation and the UI were primarily solved, the last major decision was a power source. They needed almost 400 W at a runtime of 4 hours (1600 kw). They looked at building battery packs or using lead-acid batteries when their advisor proposed using a small gasoline generator. While it required some retooling to ensure the generator didn’t get wet, the generator was the easiest solution. Seeing the boat putter around collecting samples must have been incredibly validating for the whole team.

Overall, it is a fantastic journey through developing something useful. The setbacks, successes, and processes are described in excellent detail. The whole experience is riveting and well-presented. The result inspires us to go out and make something wonderfully helpful, and is proof positive that a small team of smart engineers can help change the world for the better.